My head has been spinning over the planning for the next few days. So far this has been by far the most difficult linear walk to plan for.

I eventually arrived in Grimsby, with Gemma and Alfie for company. It was early on Sunday afternoon and I’m still unsure as to how we were going to negotiate this particular section of the English Coastal Path. Weeks after finishing this walk I found out that I had gone through a speed camera on the outskirts of Grimsby and I picked up my first ever speeding endorsement in more then 30+ years of driving.

Anyhow, I parked in the car park near to New Clee train station and immediately we donned our wet weather clothes before setting off. We used a metal bridge to cross over the railway line and then jumped over a small wall to join the coastline promenade. After roughly two miles we passed through Cleethorpes and left the promenade to follow a nice flat path through the sand dunes.

I spotted the Humbleston Fitties on my right. This disorderly, hotch potch of more then 320 small dwellings was initially constructed in the 1920’s and was used by billeting soldiers during the Second World War. During the following 80 years various constructions have replaced the original structures using a variety of different materials. All the plots are now leased by Lincolnshire County Council and for some reason the occupants are obliged to vacate during the months of January and February each year. The Fitties extends for approximately half a mile along the coast before being replaced by sodden, wet and muddy fields. I checked my map and realised that we had already covered 5 miles and thankfully the rain had eased off. Gemma commented on how monotonous the flood defence embankments were to walk along and I vigorously nodded my absolute agreement. Gemma realised that she’d forgotten to bring her water bottle so we shared the small 1/2 litre I had in my pack. On approach to Tetney Locks I telephoned AA taxis in Grimsby who agreed to pick up Gemma and take her back to New Clee. 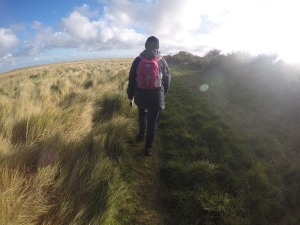 We sat for a while and agreed that I would carry on towards Saltfleet with Alfie, this was still about 8 miles away. Gemma was now heading the kilometre or so inland towards Tetney Locks to  wait for her taxi. I didn’t hang around and I strode off across the lock, lifting Alfie over the gate as it had been padlocked shut. As I approached North Coates I heard the occasional loud blast in the far distance and I just hoped Alfie wouldn’t freak out. It sounded like a firearm being discharged but when I realised the noise was coming from near North Coates airfield I put it down to being a bird scarer machine instead.

The noise got really loud and scary. As we got closer I literally ran for a few hundred metres talking to Alfie as I moved, attempting to keep him calm. The only other thing to add is that the noise appeared to stop shortly after we had got beyond the airfield, I suspected but hoped nobody had deliberately set off the machine as we approached in a pathetic attempt to stop our walk. The next few miles consisted of even more flood defences until I reached Pye’s Hall. At this location the sea embankment split in two different directions and a sign warned of a breach in the embankment and telling me to take the new sea bank. 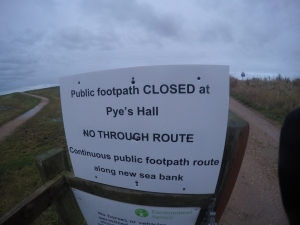 Unfortunately it wasn’t clear which was the new sea bank and which was the old route. It was a 50:50 choice and not surprisingly I took the incorrect path and spent 15 minutes and 1/2 mile going the wrong way. I turned and headed back to the original sign, muttering angrily to myself. As I walked along the (new) route I contacted Gemma and informed her that I was close to Donna Nook and the end of today’s walking. The signs indicating the start of the RAF firing range began to appear with increased frequency along the coast. Having arranged to meet Gemma I left the sea embankment and found a nice path. As I neared my final few hundred metres I began to hear strange noises coming from the beach, it was starting to get dark and the noises were unfamiliar and a little bit spooky. Minutes later I saw the sign warning me to keep dogs off the beach due to the large seal colony at New Clee. I was due to head inland to meet Gemma so it wasn’t a problem to stay off the beach. I’d enjoy meeting the seal colony tomorrow instead.
Back in the car we drove the 20 minutes to our accommodation in Mablethorpe.