I’ve got more then 23 miles to walk today and I need to get to the bus stop in central Hull (Kingston-Upon-Hull). So, despite the comfort of my bed I was up, dressed and walking along the Northern edge of the Humber Estuary a few minutes before 6am. I was walking along the sea defence flood embankment almost immediately and would walk along this path almost entirely for the next 8 hours. 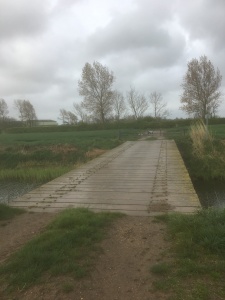 These sea defences are managed by the Environment Agency and were put there in order to replace the much older sea defence which were at risk of being washed away by the tide. Without these defences hundreds of thousands of hectares of land and hundreds of buildings would be lost to the high tide. I noticed that in some sections the grass atop of the embankment was cut nice and short whilst in others it was overgrown and poorly maintained. It made me ponder on who was responsible for maintenance of the sea wall.The miles were going by fairly quickly and the only other people 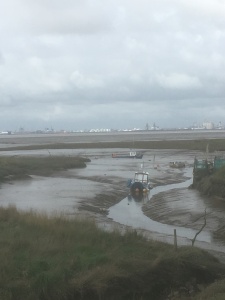 I met up with was an occasional dog walker. At Welwick Saltmarsh I left the embankment for the first time heading towards East Clough. On arrival at East Clough I found a small memorial and a dry space to sit down and enjoy my first break. I crossed over a small wooden bridge at the Patrington Channel before I rejoined the embankment shortly after leaving East Clough I continued to quickly rack up the miles. There were lots of different sea birds flying over the mudflats and I also noted several Roe deer also grazing in the distance. After Sunk Island Sands I spotted a farmer trimming the grass around the edges of the embankment. We got to chatting and he informed me that he was also a member of the local council and was aware of the impending English Coastal Path. Disappointingly he also said that there was a fair bit of resistance to such a route in some areas of Hull and the Humber Estuary. I didn’t really understand this, from what I’ve seen already there’s a decent route along the Northern bank of the estuary and it doesn’t appear to need much work done to it. 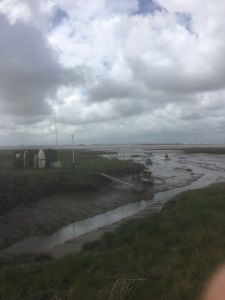 I was already 10 miles in when the well trimmed embankment disappeared and was soon replaced by a two feet high wall of wet grass. It wasn’t that difficult to walk along but less enjoyable then before. Approaching lunchtime I arrived at Coastguard Cottages near Stone Creek. There were a few more people milling around near the Ruins of the disused WW2 heavy anti aircraft battery. The ruin consists of several drab, grey concrete buildings. These were built at Stone Creek to protect the Port of Hull and the Royal Navy fuel depot at Killingholme from possibles aerial attack.

Another 4 miles along the embankment follows before finally leaving the sea defences near Paull. Things got a bit dodgy when I was forced to leave the public footpath by the Environment Agency improvement works.

I initially managed to avoid crossing over a marrow strip of water and then walked along the bank for a few hundred metres grabbing onto the vegetation to avoid a soaking. I left the edge of the water and walked through a field toward several buildings at Paull Holme. At the far end of the field the gate sign said “Private Property, No entry” I checked the map and couldn’t see any other options. If I’d noticed a vehicle on the driveway I would have probably gone to the house and just asked for permission, but there wasn’t so I just went for it. I was back walking on the public road less then a minute later. A few minutes later as a walked to Paull I looked behind me and saw a police car turn onto the private drive that I had just left. I almost broke into a run as I made my way into Paull hoping the police car wouldn’t be heading my way. I think the Environnent Agency should  have considered putting in a proper diversion to avoid this trespass.
At Paull I jumped through the doors of the first pub I found and asked the man behind the bar if there was a bus service into Hull. There wasn’t so after finishing my pint I walked a further mile into Salt End where I managed to catch a bus into Hull and then a second vehicle took me back to Kilnsea. A fantastic few days of walking was now at an end.