I’ve got some company today, I promised to buy Gemma a glass of wine at the end of the walk and that was all it took to convince her to join me. Soon after leaving the urbanisation of South Shields we took to the cliffs near Marsden. 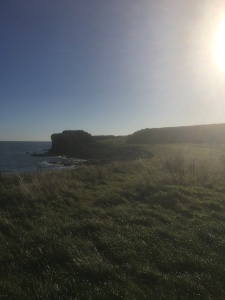 This part of the coastline is dotted with flowers and memorials, sad that the cliffs have such a bad reputation for the number of suicides. We had a short break at Souter Lighthouse. The lighthouse which opened in 1871 is located on the cliffs at Lizard Point. This area of the coastline was regarded as one of the UK’s most hazardous for shipping due to the dangerous Whitburn Steel reef. The lighthouse was the first to install Alternating Current electricity and at that time it was reported to have the brightest light in the world. Like many decommissioned lighthouses Souter is now owned by the National Trust and operates as a tourist attraction.

The path is in an excellent condition and it’s mostly flat and easy going. When we arrived in Whitburn it was close to lunchtime so we decided to grab some food at the nearest pub. We actually spent more then an hour relaxing and enjoying some hot food. When we eventually moved on, we were slower then before, our full stomachs making us feel lethargic. We took to the beach at South Bents and then alternated between the sand and the pavement for the last hour as we approached Sunderland. At the mouth of the River Wear we turned West and headed towards the town centre. As I approached Sunderland I could feel the hairs on my neck tingling, as a 100% Geordie I feel like I’m now entering enemy territory.

The first opportunity we had to cross the river was at the Wearmouth bridge so we climbed the stairs onto the pedestrian walkway and walked quickly across. We only continued along the coastline for another few minutes before we had to once again turn West and head towards the bus station and our journey back to South Shields.